The local urban condo market saw a mix of status changes nearly equally spread between new listings, pending sales, and closed sales over the last week. Overall the market remains a tight inventory downtown, but a tad more to choose from at Columbia Shores, particular in Northwynd. Those looking for the modern sustainable and walk-able lifestyle will find the selection slim Downtown but units in Parkview remain reasonably priced.

Last week the City Center Redevelopment Authority had a longish meeting, perhaps due to the fact they did not meet in January. The Port had a lengthy update on the Terminal One project primarily center around the landscaping for the connection of the Renaissance Trail from the Interstate Bridge through the Terminal One project to the new waterfront. Notable that the replacement of the 108 year old Terminal One dock was discussed with costs estimated in the $50-$60 million. Funding will potentially be a limiting factor and the time estimate for the dock and public market is out around 5 years. The port does intend to have the remains of the Red Lion Hotel that currently sits atop the dock early next year. After that is cleared they intend to make use of the dock for events, food carts, and other public uses while the funding for the new dock is secured.

The city went over the parking ideas for the new Waterfront Gateway development zone between City Hall and the BNSF railway. They went over options for parking to support upcoming development, including a future expansion of the Convention Center. There are continued discussions about connecting this new development zone to the Terminal One project via a bridge over the BNSF right of way. 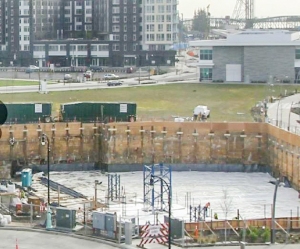 On the Waterfront, Block 20 is about to erect the tower crane that will support the project as it rises up out of the giant “hole in the ground.” At this point they are likely waiting for the concrete slab to cure then a tall crane will go up. You can see the steel base already in place.

2020 should see a flurry of new cranes to support several new projects nearing the end of the permitting process.

Angelo continues to push upwards on their new building at Mill Plain and C Street. Our city is chugging along with new urban development across the use spectrum from Residential to Commercial.