Yesterday and today have both been lovely pre-spring days with sunshine and nice temps in the upper fifties. Lot’s of people out stretching their legs after a cold and snowy February. Last week the local health officials were able to move us up in the COVID restriction chart to allow dine-in at reduced capacity. That’s a good thing. We should all continue to mask up and follow the guidelines to ensure ‘Uncle Jay Inslee’ doesn’t cut us off again 😉

A couple of new urban condos rolled onto the market last week and several more either went pending or closed and that means we are still a tad tighter on inventory that we were the week before. It is pretty tight out there. That doesn’t mean there are no opportunities, in fact there are. Some units are priced a smidgen high which keeps them around longer and leads to a potential discount offer being accepted. There was one unit in Parkview that closed at 30k under asking despite the inventory situation and that was probably because it was priced too high, or perhaps there was an issue with the unit, but either way, savvy buyers can find urban units across all price ranges. It may just require some flexibility in style, condition, location, or perhaps more importantly a little patience.

I drove around greater Downtown today and found no new ground breaking but progress is still moving along on the dozen active urban projects. Indigo Hotel is finally getting the full finished cladding and the building is looking nice. I don’t see that project finishing until late Q2 at best. It also looks like nearby DosAlas may open soon, the interior trim and finishing bits seem to be nearing completion. That is a Latin themed restaurant on the second floor of the Jean on Block 9 at the waterfront. That is just above the Wild Fin restaurant. That is an upscale version of Jorge’s Tequila Factory and Margarita factory location around the city and it should be a solid waterfront experience.

Meanwhile the AC Marriott hotel two blocks west is starting to rise with the 3 story concrete and steel base 2.5 stories high. The upper floors will be wood frame most likely. The entire Block Ten is now built up above street level. The Columbia on Block 20 at the Waterfront has been topped out for several months but things seem to be moving well with glass and insulation in. I’d imagine exterior cladding will start later this month of next. That project might just make the “Summer 2021” opening they planned for. Technically summer runs till September 22 😉

It looks like the 128 unit Aria will open sometime this month or perhaps next, it looks real close to being done. This project will offer five two story townhouse units facing West 6th basically in front of the rear parking garage with an exterior stoop to the street. It’s a clever design that gives the building a prettier street front. Then there is five floors of flats above. I’m not gonna lie, this building looks better in person than it did in the drawings and that is not always the case with these things. It’s a good looking project, kudos to Cascadia Development Partners, this is a nice follow up to the 2018 Uptown project on Main. 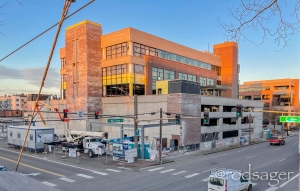 Al Angelo is making good progress on the six story Mill Plain II office and residential mixed use building. This project will feature offices as well as 44 units of apartments and a much needed parking structure to support both this building and the neighboring five story office building Mill Plain I that Angelo erected more than ten years ago. It will having a matching brick facade that ties in nicely with the Mill Plain I companion tower and both of the Prestige apartment projects across the street.

Vancouver still has a fair bit of high density infill opportunities and plenty of buyers and renters looking to get a piece of the action Downtown. Let’s make this new decade even better than the last one.