The Columbia is a project from San Francisco developer Jackson Square Properties. They have several suburban properties int he Vancouver area. Columbia is a 248 unit 7 story project under construction now on Block 20 of the waterfront.

Block 20 is the furthest west in the waterfront along the front row of blocks. This project could have been much taller but now future development projects for Block 19 and 21 can see over the top of this relatively short building. 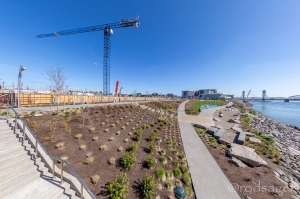 There will be multiple levels of underground parking as well as a second floor patio with an infinity pool. Columbia is expected to open in the summer of 2021. According to the developer, 75% of the units will have at least a partial river view.

Pence Construction is the primary local builder and they have a tower crane erected as of March, 2020.

This project appears to be topped out as of January, 2021. Plans remain for late Q2 or early Q3 delivery.

Update April, 2021: Tower crane supporting this project has been removed. It appears that Q3 completion is on schedule.

Progress continues, the construction can be followed with the OxBlue camera at the west end of the Waterfront. The city has it here.