Terminal One is the original Port of Vancouver terminal utilized when the Port Authority was created back in 1912. The dock and warehouse operation dates to the 19th century.

Today Terminal One is the only one of the five Port of Vancouver terminals open to the public. Back in 1960 the Port of Vancouver decided to create public access by granting a lease for a Hotel / Restaurant operation that became known as the Inn at the Quay. It was operated by Red Lion hotels as recently as 2015. The Hotel complex has been mostly razed to make way for new development forthcoming.

The Port will need to rebuild the more than 100-year-old dock that the current Warehouse 23 restaurant sits on. The Port of Vancouver USA presented a master plan to the City of Vancouver which was approved in the summer of 2017.

The ultimate goal is to have a vibrant addition to the larger Waterfront development to the west. This $500 million plan includes an AC Marriot hotel which is under construction, and ultimately a public market in the vein of Seattle’s Pike Place. A video presentation of the concept is below.

The latest drawings for Blocks A and C have been presented to the CCRA they include a mixed use residential building and a mixed use office with a clever design that conceals parking in the back. Additional information on this latest development was presented in the CCRA meeting in December 2019. Discussions about the possibility of connecting the new waterfront 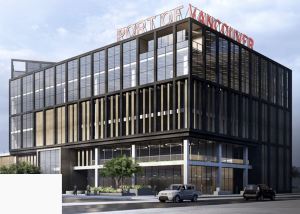 gateway area with this Terminal One project via a sky bridge over the BNSF railway seemed to go over well with Port and City officials. The two projects on Blocks A and C would be separated by a lovey pedestrian plaza with steps up to a height high enough to see over the BNSF railway berm offering public views of Downtown and the Columbia River. 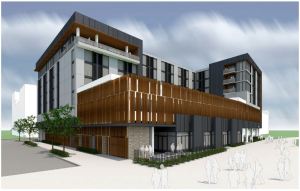 The AC Marriot hotel is underway with ground stabilization and prep work for the building that should start rising up this spring. It is expected to be complete and operational by summer 2021 and will be the first new project completed on the $500 million redevelopment at terminal One.