Portland’s Pearl District has become the gravitational center for urban living in the Portland-Vancouver metro area. From its humble roots as a run down warehouse and industrial area in the 1980s to a revitalized residential area with arts and entertainment a local focal point, the Pearl District is top dog among local urban living areas.

Vancouver USA has not reached the same level of urban density as the Pearl, nor are there as many options for purchase. Rental units in Downtown Vancouver are coming active almost every day! The Pearl has more localized amenities to be sure, but Vancouver USA very well can be an excellent alternative to Portland in general and the Pearl District specifically.

Here is a chart comparing the two areas and in this case Vancouver’s Esther Short Neighborhood is where the bulk of the urban condos are (stats from 9/4/2019) : 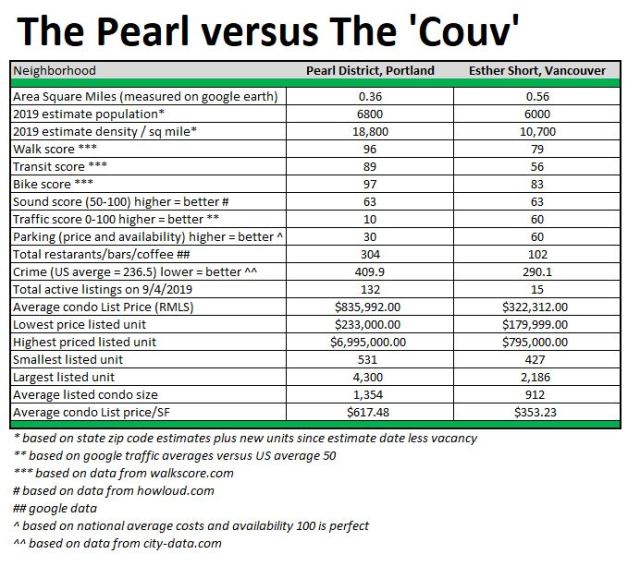 The Pearl District has roughly 40% of its housing units as condos which stands in stark contrast to Esther Short which is closer to 15%. Vancouver has been on a binge building apartments to combat its crazy tight rental market which for a couple of years was the tightest in America. In fact earlier this year rental rates were actually higher on average in Vancouver than Portland, despite Vancouver’s notably lower median home price.

Looking at the data, the Pearl is a much more densely built urban area and offers a significant number of restaurants, pubs, and such. It is Portland’s most walk-able neighborhood scoring near perfect on walkscore.com. Although Downtown Vancouver does not reach the heights of urban walk-ability as the Pearl, it is just a grocery store away from punching through the 90 barrier, and one of those are likely coming soon. Vancouver’s Esther Short neighborhood is also adding restaurants, bars, pubs, breweries, and other wine and dine establishments at a vigorous rate, the Pearl is gaining and losing in near equal amounts. In other words, Downtown Vancouver and the new Waterfront are quickly closing the gap.

One could argue the Pearl has a robust art scene, but that same argument can be made about Downtown Vancouver which has blossomed into an amazing art and cultural area. With most of a regional media based in Portland, Vancouver has always been, and will likely continue to be relegated to an media after thought. That said, it is the metro area’s best kept secret. Vancouver USA continues to quietly march ahead with more and more urban development, quality parks, a fabulous waterfront, relatively light traffic, ample parking, and a vibrant Downtown buzz.

Where the Pearl scores better in walk and transit scores you may as well sell your car if you live there. It cannot be overstated that cars and the Pearl are oil and water. Traffic is terrible, getting out of town is brutal, and parking for your visitors is nearly non-existent, not to mention a bit expensive.

The Pearl District additionally suffers from some of the big city woes that plague most major cities, increased crime, traffic, and noise. The Esther Short neighborhood is influenced by two airports however and has noise levels comparable to the Pearl.

The Pearl District is a bit flush with inventory at the moment. I pulled 132 active units and that is much more than the standard healthy 6 months inventory. Esther Short on the other hand is within that neutral healthy window with about 4 months of inventory but only 15 active units. Although the largest and most expensive unit currently listed in Esther Short is half the size of the biggest unit in the Pearl, Vancouver does offer large 3000-4000 SF units, none are currently listed for sale in Esther Short, a couple are listed east of the Downtown. Inventory on the north side of the Columbia for urban condos is tighter than the seemingly bloated Portland market.

The bottom line is that the Pearl District is right in the middle of Portland’s core area, it is the most urban residential neighborhood in the metro area. It has a great deal of things to do within a short walk of whatever unit you buy. It also has a lot of transients camping about, litter, and the Willamette River waterfront is a bit of a hike from most Pearl condos. Vancouver’s Esther Short offers a nice urban vibe without the insane densities, traffic and other urban woes and most locations are a short walk to Esther Short Park and the new Waterfront.

Higher income retirees will save a lot of money on taxes choosing the Washington side of the Columbia the value of which should not be underestimated. Let’s not forget that despite Vancouver’s high rental rates, the price of condos are much more reasonable than Portland.

Potential Pearl District condo buyers are well advised to look at all their urban options which includes the West Hills, South Waterfront, Vancouver, Lloyd District, the Interstate Avenue corridor in North Portland, and the Hollywood District. Vancouver’s Esther Short really has a little bit of everything, and not allot of the city negatives. It remains a viable and for some desirable alternative to Portland.